You are visiting: Home > Steve Smith Visits B3! 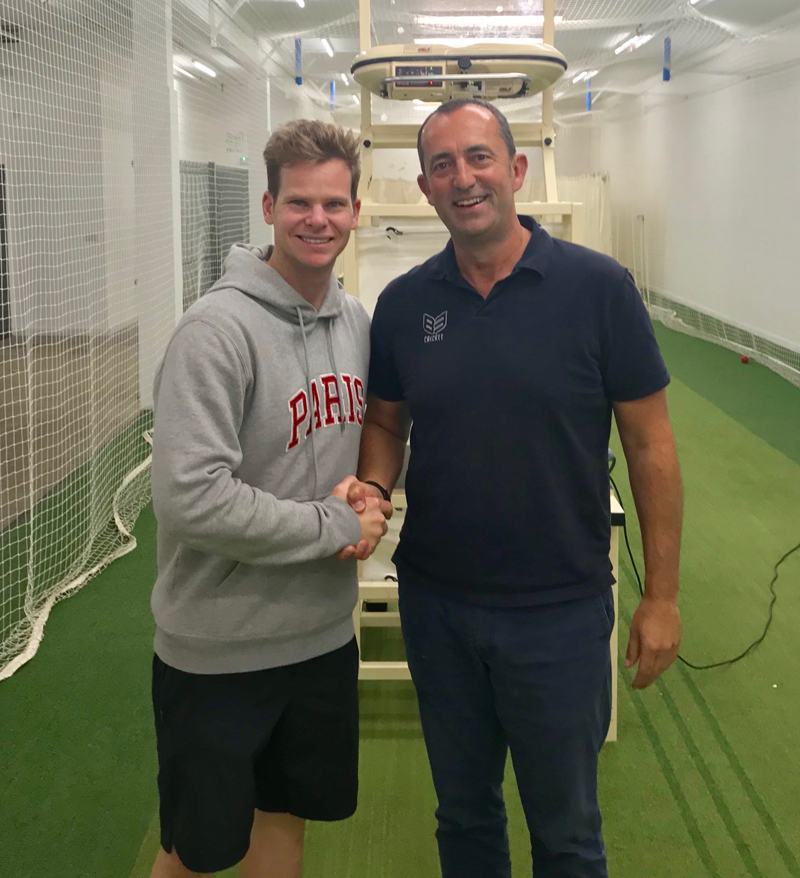 B3 are the official ‘Bat Repair Partner’ for New Balance in the UK carrying out all their repair and warranty work. As such, in late August, we were asked if we could help Australian batsman, Steve Smith, fine tune some of his match bats. At the time, the Aussies were close by, just up the road playing Derbyshire in a tour match, so Mr. Smith didn’t have too far to come.

Here at B3, we deal with a lot of the game’s elite players. Most of the time, we don’t get to meet them personally because they usually send a member of the support staff to ferry their bats and explain what needs to be done. Imagine our star struck, cricket badger excitement when we were told that Smith would be visiting in person!

“Smith arrived in a taxi with a bag of bats over his shoulder and immediately you could tell he was just a normal bloke, very humble and unassuming.”

Now I’ve met several high-profile celebrities in my time (I once met the bloke who played Terry Duckworth, in a Nottingham Casino, in the early ’90s) and the truth is, you never know what you’re going to get. Would Smith be a cocky Mr. Big Time? Would he be elusive and not want to talk to any of us? We really didn’t know what to expect.

Smith arrived in a taxi with a bag of bats over his shoulder and immediately you could tell he was just a normal bloke, very humble and unassuming. He felt just like another customer, a regular guy who loves his cricket.

He spent a long time with Gav and Neil in the factory explaining exactly what he was after in terms of alterations to 3 of his bats. To be honest, he wasn’t that fussy compared with some of the pro’s we have dealt with, Jonathan Trott being probably the fussiest, he could spot a half millimetre difference in the shoulder of his bats from 22 yards!

Smith was primarily interested in making sure all the bats were the same weight and feel. His current favourite was 2 pounds and 9.6 ounces to be precise. We used this as the template and adjusted the others, which were slightly heavier, to the same weight.

Whilst he waited for his taxi, Steve was good enough to talk with me about the Russ Evans Foundation. An organisation we have set up in Russell’s name to promote umpiring to young people. He was genuinely interested and was happy to sign a couple of bats for our forthcoming charity dinner and auction.

Coincidentally (not ) my son and nephew were having a hit in our indoor net facility at B3 and whilst he waited for his return taxi, he went and had a look at them. He chatted cricket with them and was happy to have a photograph. They were equally impressed with Smith.

Obviously, the former Aussie skipper will always have his critics for ‘sandpaper gate.’ However, I got the impression that he is a very genuine man and I’m guessing he is deeply sorry for the mistakes he made, and he will spend the rest of his life trying to make it up to the sport.

Smith made quite an impression on us all, and it looks like we did a decent job on his bats. On reflection, as England fans, perhaps we did too good a job, a few days later at Old Trafford, he went onto score 211 and 82 and won the Player of the Match.

Join the B3 Cricket VIP Club for the latest news, coaching and great offers/discounts for you and your Cricket Club …. Learn More and Sign Up Here