You are visiting: Home > 5 Most Controversial Bats in Cricket History 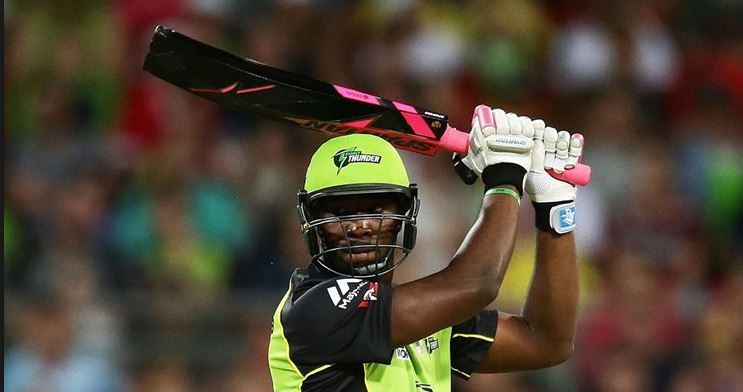 5 Most Controversial Bats in Cricket History

Here at B3 we consider ourselves at the forefront of the cricket bat industry. Our unique blend of production technology and traditional values are well documented and we are always looking to the future to see if we can innovate and improve.

Searching for an advantage is part of natural evolution, in the cricket world this quest has led to some very controversial designs. Here B3 Production Director, Dr. David Bacon, explains what he considers his top 5 controversial cricket bats.

Painting cricket bats is a tactic used by many bat makers to hide the lower quality willow. A paint job can mask all sorts of nasties including stains, knots, hard bars and a low number or wavy grains. Another tactic used is to make your stickers so big they cover most of the willow!

Painted cricket bats have also been used at the top end of the market by professional players who don’t need to hide the imperfections of cheap willow. So if they are getting great bats, why hide it? Does the paint improve the performance? The answer of course is that they do it purely for marketing and publicity, simple as that.

My first recollection of the painted cricket bat was whilst working at Gunn and Moore, and a few of our sponsored players had been selected to play in the ill-fated Stamford Cricket competition in the West Indies. Whilst the bats did not kick up a fuss, the tournament sponsor definitely caused controversy.

In 2015, Chris Gayle used a special gold bat in the opening game of the Big Bash League (BBL). His sponsor, Spartan, flew the golden blade in from India and Gayle, who’s not shy of a bit of bling, wielded 23 before holing out.

This bat created a huge controversy with reports of metal being used in it. However Spartan Cricket rubbished such reports saying “There is no metal in the gold colouring we are using in the bat. There are restrictions on what you can and can’t use” 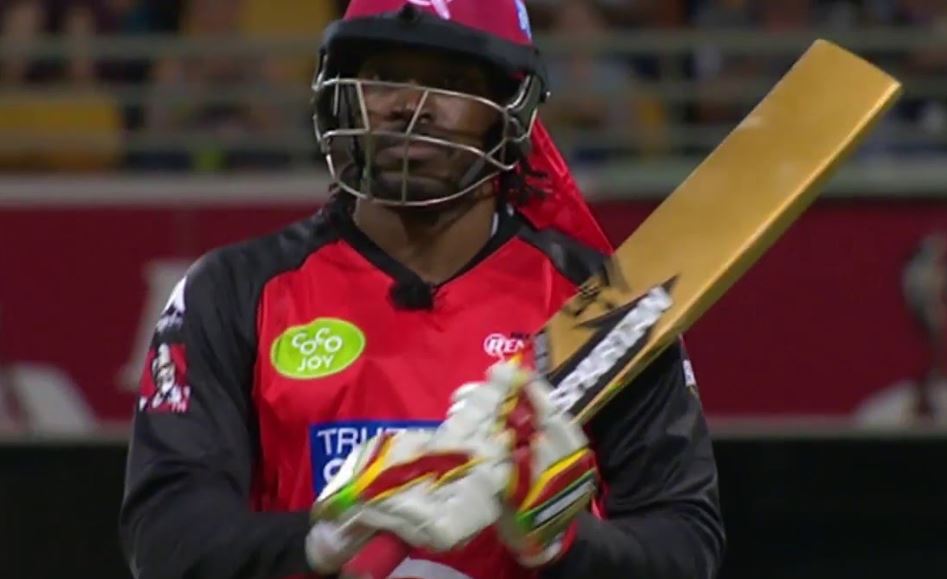 One year later, and again in the Big Bash, Andre Russell playing for Sydney Thunder used a Spartan cricket bat painted black. Despite his short stay at the crease, the opposing wicket keeper (Sydney Sixers Brad Haddin) noticed black spots emerging on the ball, and said afterwards that if Russell had battled for a prolonged period of time, the ball may have proven hard to see. Less than 24 hours after the game Cricket Australia banned the use of coloured bats that cause discolouration to the ball.

Despite this, the PR stunt had done its job because everyone was talking about the Spartan coloured bats.

An incident in 1771 brought about a change in the laws of cricket which governed the width of cricket bats.

On September 25th of that year there was game between Chertsey and Hambledon. Thomas White playing for the former came out with a huge bat wide enough to cover the stumps. This meant that if White had intentions of blocking every ball, no one could ever get him out.

Hambledon fast bowler Thomas Brett led the protest against the use of the oversized stick and he and his team mates started a petition which led to a change in the Laws of Cricket and the maximum width of the bat was set at four and a quarter imperial inches. White’s ingenious plan backfired as he was lambasted throughout the game for poor sportsmanship.

Incidentally, Chertsey lost the game by just one run as they failed to chase down Hambledon’s 218. 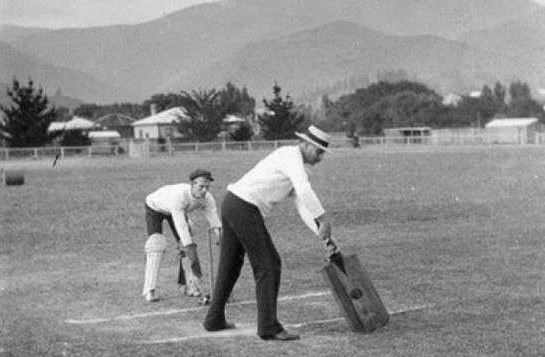 The bat used might have looked something like this picture, a bat wider than the stumps is just not cricket.

Back to marketing gimmicks, not so long ago the Mongoose bat was spun as a real game changer that would revolutionise cricket bat design. High-profile players such as Australian Opener Mathew Hayden, Mohammas Ashraful, Stuart Law, James Anderson, Andrew Symonds and Marcus Trescothick added fuel to the fire, for a small consideration in the bank accounts of course!. 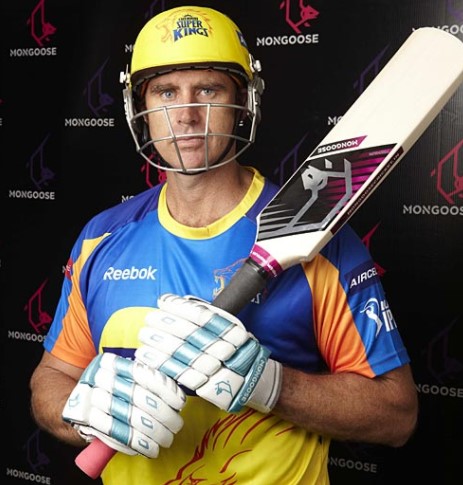 Whilst their claim to have a created a lighter bat was most definitely true – the Mongoose weighed in at an average 2lb 6oz, in reality due to their design, these bats pick up a lot heavier and felt like you were batting with a 2lb 12oz bat and thus losing their appeal.

When launched a leading cricket retailer told me, “It is the most picked up bat in the shop by far.” My obvious retort was, “but how many have you sold?”…..the reply said it all……..zilch!

Another major issue with the Mongoose was the super-super short blade. Imagine playing a back foot defensive shot to a fast rising ball with a blade a third shorter than your normal bat. That’s right you start to miss the ball and get hit or worse still – nick off!

It wasn’t long before all the pros who had been shouting the praises of the Mongoose returned to using a normal length bat. With no viable USP and just a pretty logo remaining Mongoose soon disappeared from both the shops and limelight!

In 2005 Australian captain Ricky Ponting’s bat came under scrutiny for a thin strip of carbon graphite which was attached to the back of the blade. The bat had been regularly used by Australian team mates Justin Langer and Damien Martyn. Sri Lanka’s Sanath Jayasuriya was also using this new innovation.

The MCC expressed their concern to the International Cricket Council stating the strip was adding extra power to the bat which was an advantage for the batsman.

Ponting, with the same bat, had hit a double century versus Pakistan at Sydney in a Test match in 2004-2005.

The graphite bat favoured by Australian captain Ricky Ponting was withdrawn from first-class cricket by October of 2016 by International Cricket Council (ICC). The decision was reached after the ICC received advice from the Marylebone Cricket Club (MCC) that the bat contravened Law 6 of the game’s rules and, in the MCC’s view, was illegal. They also rejected two other Kookaburra bats, the Beast and the Genesis Hurricane which also had brightly coloured graphite strips down the back of the blade, stating that the addition of graphite broke the laws regarding bat enhancements. To read Law 6 please click on the following link:

Six weeks after the product was scrapped from international cricket and Australian manufacturer Kookaburra agreed voluntarily to withdraw its graphite-reinforced bat from all first-class cricket.

“Kookaburra’s proposal has been supported by the ICC member countries who have agreed to allow the use of the bats at levels below first-class domestic competition for the duration of the natural lifespan of the bats”.

On December 15, 1979, Australian fast bowler Dennis Lillee walked out to the middle with an aluminium cricket bat against the old enemy England. It was the first Test of the Ashes Series in Perth and at stumps on day one Australia were struggling at 232/8 with Lillee not out on 11.

After a good night’s rest the Australian batsman strode to the crease on the second morning but Lillee has changed his willow of choice. In fact it wasn’t willow at all, the new bat was made of aluminium! This wasn’t the first time he had used it, just 12 days prior he had used it in a game against West Indies at Brisbane without complaint.

However, this time saw complaints not just from the opposition but the Aussie speed kings own captain, Greg Chappell. Controversy flared after just four balls of the second day when Lillie hit a delightful straight drive down the ground which failed to reach the boundary. Chappell thought the ball should have made the ropes and immediately asked 12th man Rodney Hogg to hand Lillee a traditional bat. But the fast bowler was in no mood to listen or indeed concede his metal bat to his skipper’s wishes and belligerently continued playing with the one made of aluminium.

Meanwhile, England captain Mike Brearley complained to the Umpire that the metal made bat was damaging the ball. At this point Chappell lost his patience and walked onto the ground personally to hand a traditional willow to an angry Lillee who proceeded to throw the offending bat. After ‘spitting the dummy’, Lillee resumed with the traditional bat but didn’t last long, adding only 3 more runs to his total before being caught.

Watch the archive footage below to see how the events unfolded.