You are visiting: Home > B3 Support War Child Cricket Match 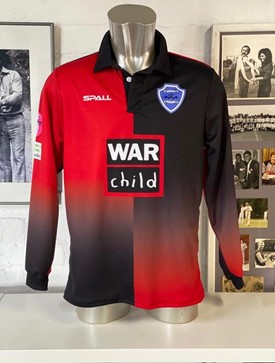 This Saturday sees a very special cricket match take place in Leicestershire in the aid of War Child, a charity that helps children whose lives have been torn apart by war.

The match between Heaven Help Us CC and Authors CC will feature an eclectic mix of players and whilst this match is for charity, both teams will be looking to secure victory!

B3’s MD, Michael Blatherwick, has the honour of captaining the Heaven Help Us team and in support of War Child, B3 are also raffling a top of the range custom cricket bat!

Here’s a bit more about the game:

Donate £3 to War Child and Win a Custom Bat

Please click through to the Just Giving page below to donate to War Child.

For every £3 donated, we will put your name into the draw for a B3 custom cricket bat of your choice.

Former England international and Heaven Help Us CC player, Chris Lewis, will draw the winner on October 8th, so tickets are available to purchase right up until the 7th of October.

War Child is the only specialist charity for children affected by conflict and for over 20 years they have helped give a chance to children whose lives have been torn apart by war. War Child aims to reach children as early as possible when conflict breaks out and stays to support them through their recovery – keeping them safe, helping them learn and cope with their experiences, and equipping them with skills for the future.

The Spirit of Cricket states: “Cricket is an exciting game that encourages leadership, friendship and teamwork, which brings together people from different nationalities, cultures and religions, especially when played within the Spirit of Cricket.”

The club brings together a wide spectrum of people who are leaders in their respective professions – public service, literature, law, academia, charities, faith, the arts, business and sport. The club brings together cricketing friends from different nationalities, cultures and religions into a single a cricket club to promote the Spirit of Cricket by supporting charitable and community causes.

Here’s an introduction to some of the players lining up for the Heaven Help us side:

Heaven Help Us CC will be captained Michael Blatherwick, Managing Director of Nottingham bat makers, B3 Cricket. He also Chairs the Russ Evans Foundation which supports young people who want to get into cricket umpiring. Michael was asked to make the clubs ceremonial bat which has ‘Vitai Lampada’ engraved into it which translates into ‘The Torch of Life’ – the HHCC motto.

Michael will be joined by:

One of the world’s oldest wandering cricket teams, the Authors were an Edwardian cricket team and an offshoot of the Authors Club, founded in 1891 for writers to meet and talk. PG Wodehouse, Arthur Conan Doyle and JM Barrie were regulars in the side, which would play the Actors and the Publishers each year at Lord’s. The last of these matches took place in 1912 and the side then dispersed.

A later incarnation of the Authors saw some of the greatest cricketers of all time including Denis Compton, Richie Benaud and Len Hutton play alongside the likes of Edmund Blunden and Neville Cardus at Vincent Square.

In 2012 the team was revived by Charlie Campbell and Nicholas Hogg. In their first season back they played over a dozen matches at some of England’s most historic grounds against a wide range of opposition and wrote a book about their season. That winter the Authors played a Rajasthan Royals XI to open the Jaipur literary festival, with the captains riding out for the toss on camels. They have since played the Vatican and the national teams of Iceland and Japan.

Here’s an introduction to some of the players lining up for the Authors side:

Nicholas Hogg will skipper the side.His novels include Tokyo, a literary thriller and Show Me the Sky which was nominated for the IMPAC Dublin Literary Award. His short stories have won numerous prizes and have been broadcast by the BBC.

Jon Hotten author of Muscle, The Years of the Locust and his most recent, The Meaning of Cricket, which has appeared on several Book of the Year lists. He co-wrote the award-winning documentary Death of a Gentleman, and his collaboration with the former England bowler Simon Jones, The Test, won the Wisden Almanack’s Book of the Year award in 2016.

Tony crowned his career this year when Lark, the final book in his YA series The Truth of Things, won the CILIP Carnegie Medal, one of literature’s oldest and most prestigious prizes. His 40+ books cover a remarkable range: just before Lark, he published How to Teach Philosophy to Your Dog, an acclaimed guide to the great thinkers and thinking of history.

His six novels include Acts of the Assassins, shortlisted for the Goldsmith’s Prize. His four works of non-fiction have touched on cricket and rugby, and his memoir The Day That Went Missing won the 2018 PEN Ackerley Prize and was shortlisted for the Rathbones Folio.

Ollie’s biography of Ravi Shankar, Indian Sun, was published on the celebrated musician’s centenary in 2020 to huge acclaim. He first met Shankar in 1994, and collaborated with him on his autobiography Raga Mala. As an editor he has worked on titles by, among many others, David Bowie and George Martin.

Winner of the 2019 Wisden Writing Award.