You are visiting: Home > The Futures Bright for B3’s Emma Lamb 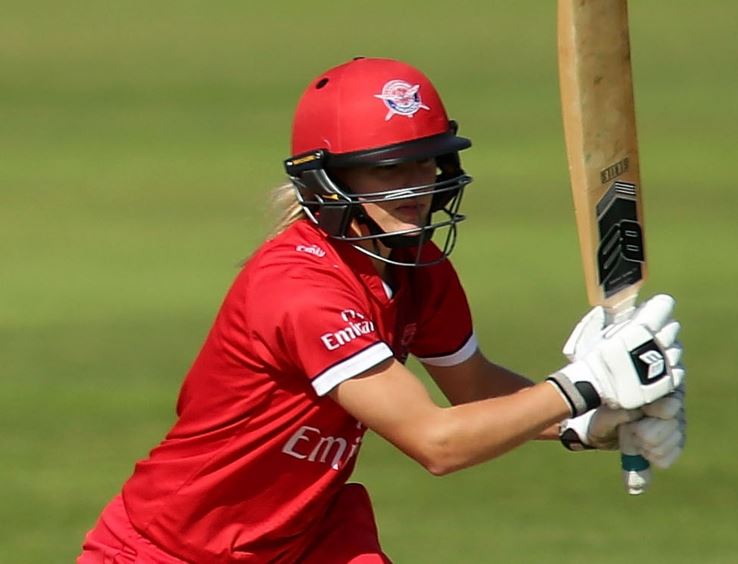 In the February edition of All Out Cricket, they caught up with B3 Ambassador Emma Lamb, after a very successful 2016 campaign, the England Star has a very bright 2017 to look forward too.

“Last year was a pretty forgettable affair for many people, but not so for Emma Lamb. A successful Kia Super League for Lancashire Thunder saw her earn her first call-up to the England squad. With a massive year ahead for women’s cricket – including the prospect of a World Cup final at Lord’s – we caught up to chat about what 2017 might deliver.

Last year was obviously a successful year for you. When you look back on it, what’s the first thing that comes to your mind?

The Kia Super League stands out for me, I had a lot of fun during the tournament. It was such a good experience, and I learned a lot from being around the overseas players, as well. I was aware of what a good opportunity it me be – I think it was a great chance for all the girls to be honest – because it meant playing on good pitches and against good players. It was exciting!
You might also like

You’re clearly a positive player, you like hitting over the top and want to get on the front foot, would you say your style suited the step up in quality?

It definitely helped. Obviously there are parts of my game I still need to work at, and I can always do better, but that extra bit of pace on the ball with the better pitches, it all contributed. It was a great experience.

You mentioned the overseas players. What was it like sharing a dressing room with some of those big names?

It was fantastic. They were all helpful but Amy [Sattherthwaite] especially, she had a lot of advice for me. I chatted to her quite a bit before games, and it definitely helped with my confidence. The way she carried herself – I definitely tried to copy her a bit! Deandra was a good character as well, and Hayley brought a lot of laughter.

It must have been exciting to play in front of a few big crowds?

It was. Twenty20 games are pretty quick compared to one-day matches, so I was always quite focused on what was happening in the middle in the moment, but occasionally I would look around and think, ‘That’s quite a big crowd, I’m not really used to this!’ I think it motivated me to perform better, to do that bit more.

And then after your KSL success, you got a call-up to the England squad. How did that feel?

It was amazing. It wasn’t shocking, as such, because I knew I’d done well, but I was still thinking, ‘No, they won’t take me’. When Mark [Robinson] called me I was just thinking, ‘Wow, it’s actually happening.’
Two years ago I never thought I’d be where I am now – I wouldn’t have thought I’d even be training with the first team!

Was it daunting being on tour? And did you feel like your game improved?

To be honest, it wasn’t that daunting. I’ve trained with a lot of the girls in the full team before, so I know the environment. It gave me a lot of one-on-one time with the coaches, which I don’t often get, so I learned a lot. I was training loads, and it’s just so good to be around them – my game definitely came on. I picked stuff up from the coaches, stuff I would never have seen on my own.

It’s a big year for women’s cricket and it could be a big year for you personally. Have you set yourself any targets, I guess making your international debut?

At the end of that journey there’s the possibility of a World Cup final at Lord’s. Have you thought about what that might feel like?

I hope it happens. I’ve got to take it as it comes – but it’s something I’d love to do. Two years ago I never thought I’d be where I am now – I wouldn’t have thought I’d even be training with the first team! There are definitely a lot of opportunities around the England team at the moment and hopefully I’ll get a chance to play soon.”

Courtesy of All Out Cricket – http://www.alloutcricket.com/features/emma-lamb-ksl-great-experience