You are visiting: Home > The B3 Bespoke Cricket Bat Experience 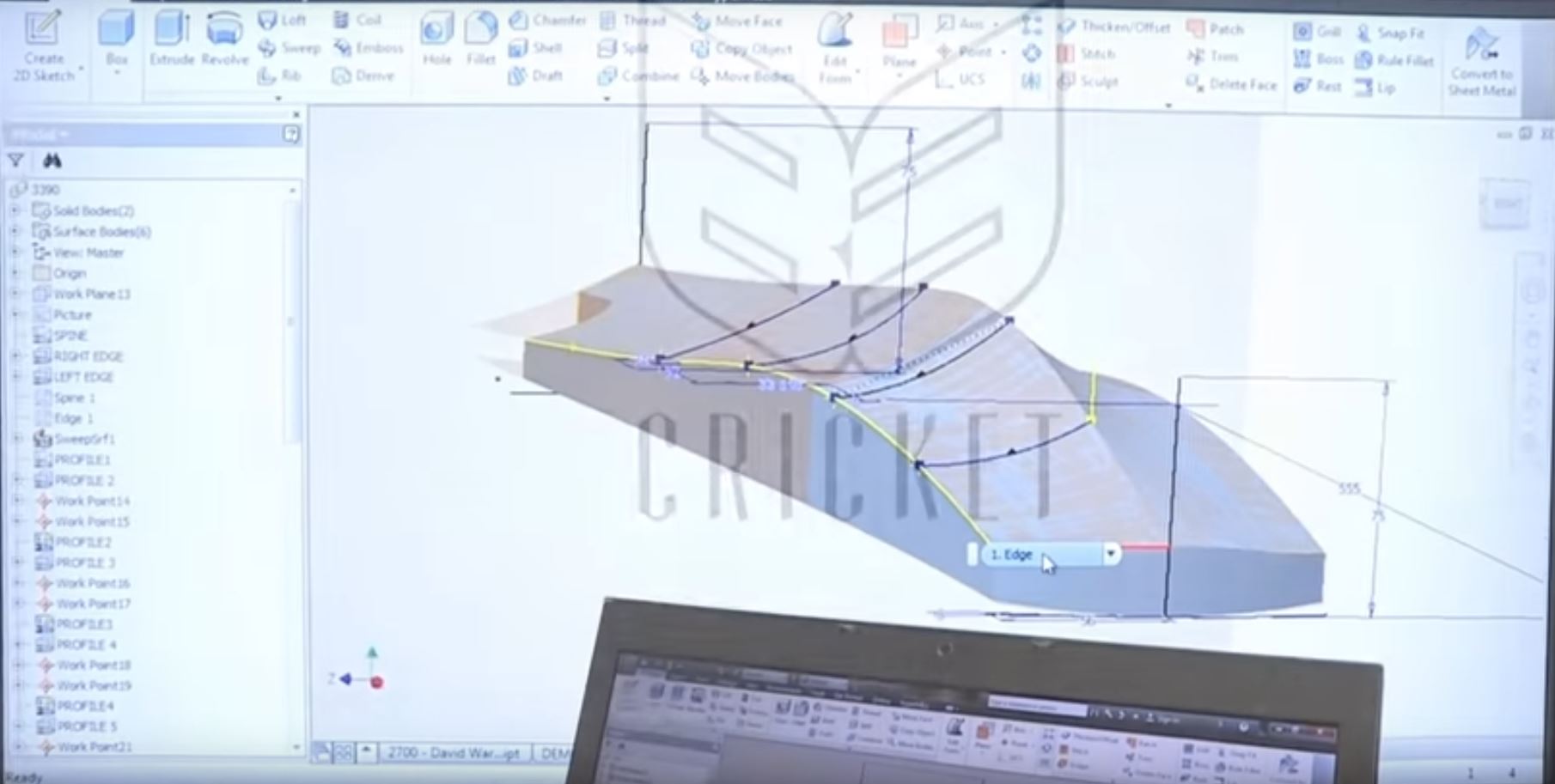 The B3 Bespoke Cricket Bat Experience

“People tend to create their new bespoke bat in one of three ways,” says David Bacon, Production Director at B3. “Some people know exactly what they want and can tell me, right down to the nearest millimetre or tenth of an ounce; others just bring in their favourite bat and say ‘Same again please’; while the third group will discuss it with me and we’ll think about what they need, the way they play and so on, so we can match a bat to their style.”
I was in the third category when I asked B3 to make my new piece of willow. I talked about previous bats I’d enjoyed playing with, what sort of weight I like, how I play, where I tend to hit the ball, where the ball strikes the bat most often and which foot I play off the most.
One of the first things to check is whether the weight of the bat I would like will work with the design I would like.  This all depends on the density of the wood, says David (also known as The Bat Doctor).  The calculation at the heart of it is Density x Volume = Finished Weight.
Fortunately the B3 factory has hundreds of clefts of willow, each unique and with their own carefully measured density. So once the design is finalised, it’s a matter of finding the right piece of wood at the right density and quality to make your bat. The guys at B3 usually select a few clefts that fit the bill and leave the final decision with the customer.
“Sometimes people have concerns that a lower density bat will not perform as well as a higher density bat,” says David. “However, the density does not affect performance, so a 2 pound 8 ounce bat can be the same size and perform just as well as a 2 pound 13 ounce bat. This means the customer can rest assured that they need not compromise on the weight of the bat they want.”
My bat
I spent an hour sitting with David, who showed remarkable patience as I picked up dozens of bats, learned about the bat-making process, the different handles available and so on. We worked on the shape of the bat together on his advanced computer-aided design programme to make everything just perfect. Every adjustment makes a difference to the overall feel of the bat so it’s important to get everything right – density, weight, where the middle is, the thickness of the edges, the shape of the handle (round, oval, somewhere in between), the thickness of the handle, the amount of binding wrapped around the handle, the number of rubbers…
To be honest, it was a lot to take in. If I was to offer any advice to someone coming in to get a bespoke bat at B3, it is definitely a good idea to have some idea of what you want! But even if you don’t, then once your perfect bat has been made, you can just ask them to replicate that time after time. That’s my plan anyway.
There are limits to the customised, bespoke bat-making process. “Unless we are specifically asked by a customer, we will never sacrifice performance for style. Even then, we would be extremely reluctant to do so as it’s our name on the bat and we want every bat that leaves the factory to be a credit to the B3 name. This means that if people ask us to replicate an old bat of theirs, sometimes we advise some slight changes just to improve performance and longevity.”
Just days after designing my dream bat, it was ready for me to collect. Even after dozens of bats, it’s still a thrill to pick up a new one, especially one that has been designed just for me.  B3 put a coat of oil on it and water-repellent on the toe and handed it over with the instruction not to over-oil but to give it plenty of knocking-in.
And so, off I went with my new bat, a bat I knew was the only one like it in the world.
We use cookies on our website to give you the most relevant experience by remembering your preferences and repeat visits. By clicking “Accept All”, you consent to the use of ALL the cookies. However, you may visit "Cookie Settings" to provide a controlled consent.
Cookie SettingsAccept All
Manage consent